The “Vittoriale degli Italiani” (The Shrine of Italian Victories) museum was the residence and final resting place of one of Italy’s most famous as well as interesting personalities… Gabriele D’Annunzio.

In the era before World War I D’Annunzio was one of Italy’s most influential politicians, a charismatic leader adored by his followers, and was regarded as a national treasure.

He was a true war hero known for his boldness and outright courage.  A “Renaissance Man”… he did it all as an artist, poet, journalist, playwright and one of Italy’s most popular, as well as controversial, writers of the 20th Century.

But another part of his lore was derived from his legendary affairs as he boasted to have seduced over 1,000 women.  Being married to a young aristocrat with three sons did not stop him from his constant affairs (sometimes multiple at once) throughout his adult life.

The Era of the Fascist Regime

During World War I he became a powerful figure and began asserting his very strong ultra-nationalist doctrine.  But at the same time Benito Mussolini was developing his movement with a more extreme right leaning tilt.  After the dust settled, Mussolini had more power, influence and aggression than D’Annunzio and created a more dominant form of Fascism.

The Dictator and The Poet

On the evening before a fateful assembly to determine the “meeting for national pacification”, the Poet was thrown out the window in his Lake Garda Villa onto the courtyard and his active career came to a bone crushing halt.

Two months later, Mussolini did his march on Rome and took control of the country.

The Dictator kept him on the side lines and out of his way.  He was known to have said… “With a rotten tooth, you either pull it out, or fill it with gold!  With D’Annunzio I have chosen for the latter treatment.”

So he vastly enhanced D’Annunzio’s villa into a monumental residence, and provided him a constant supply of cocaine… in essence he literally paid him to remain out of politics. 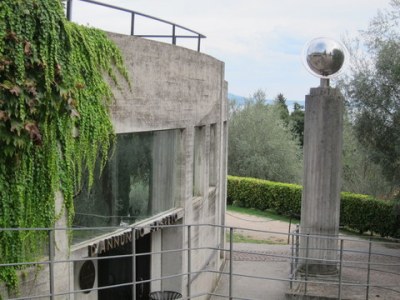 Entrance to the Auditorium 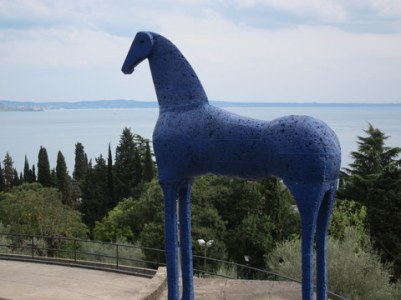 On March 1, 1938, D’Annunzio died at the age of 75 of a cerebral hemorrhage.  His funeral was a large Fascist state affair and Mussolini walked with his coffin.

The visit to Lago di Garda and the town of Gardone Rivera provided us with wonderful memories but the surprise history lesson about an unusual personality was a definite highlight.

The Poet and the Dictator that Shaped the Destiny of Italy

After all, what is the hurry… be inspired.